About Chef Joe Ciminera
When Chef Joe was only 24 years old he received a 3 star review from the New Yorks Time labeling him one of the most creative young chefs in NYC. Later that year he received the Gross Bonnett award, no other chef in the world has been given this award at such a young age. Ciminera’s training started at the Five Star Five Diamond Hotel Venesia in Milan Italy, he tutelage under Master Chef Vincenzo Provino. He then went on to work with some of the nation’s top chefs including Daniel Boulud, Christian Doulevere, Pierre Manor, Mike Depirito and Jean Louis Pallidan. Ciminera’s book entitled “In The Weeds”; a volume of chef’s tales has sold over 750,000 copies. His latest book, “Joseph Ciminera’s new American Cooking” will broke 1 milion copies sold in 2011. His latest venture is to help fight against one of America’s growing health issues…Childhood Obesity.

Chef Ciminera started Taste This TV in 2002 with the help of Julia Child and Joe Andaloro. The show became an instant hit and with over 338 episodes filmed Taste This TV still remained to be one of the longest running cooking shows in American history. 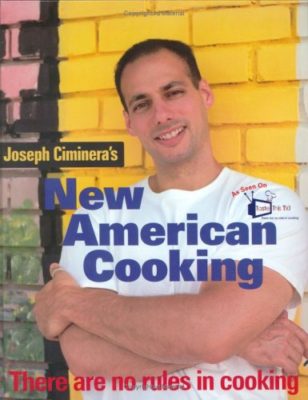 Joseph Ciminera’s New American Cooking:
There Are No Rules in Cooking

Chef Joseph Ciminera’s book excites the reader to self activity. His easy to follow creative recipes can be easily
duplicated and rewardingly enjoyed. Everyone who reads this book will obtain the power to magnify themselves
as kitchen masters. The recipes in this book are an example of a wide range of possibilities for what you can do with
food. The style of cuisine is New American with a European flair.